NOTE ON BREED IDENTIFICATION OF INDIGENOUS HORSES. Breed identification of the indigenous breeds of horses in India for DNA typing for parentage by the Stud Book Authority of India- RWITC. The breed standards have been taken from the under mentioned authorities as under:-- MARWARI – from the NRCE Hissar, which was approved by the IHSI and the AIMHS on 25 th November 2006. KATHIAWARI – from the Director Animal Husbandry, Government of Gujarat letter no. DAH/SDB/1/781/2004 dated 13 th July 2004. MANIPURI – from the Manipuri Breed Society as approved by the Department of Animal Sciences, Central Agriculture University Imphal and Directorate of Veterinary and A.H. Services, Government of Manipur. SPITI – from the Director Animal Husbandry, Government of Himachal Pradesh letter no. AHY-H(ii)-F-7-26/76-XII dated 13 th December 2007. ZANSKARI – from the Project Officer Defence Research and Development Organization, Field Research Laboratory, Ministry of Defence, Leh and Ladhak, letter no. 118/6/Ponies/FRL dated 17 th August 2003. SINDHI – from Surat Horse Society, Lakhi Sindhi Horse Breeders Society, from the UNDP website and NRCE study of 2013. NUKRA – based on discussions with experienced breeders and from the international study on the Lippizanner / Cremello / Sabino and Tobiano horses. 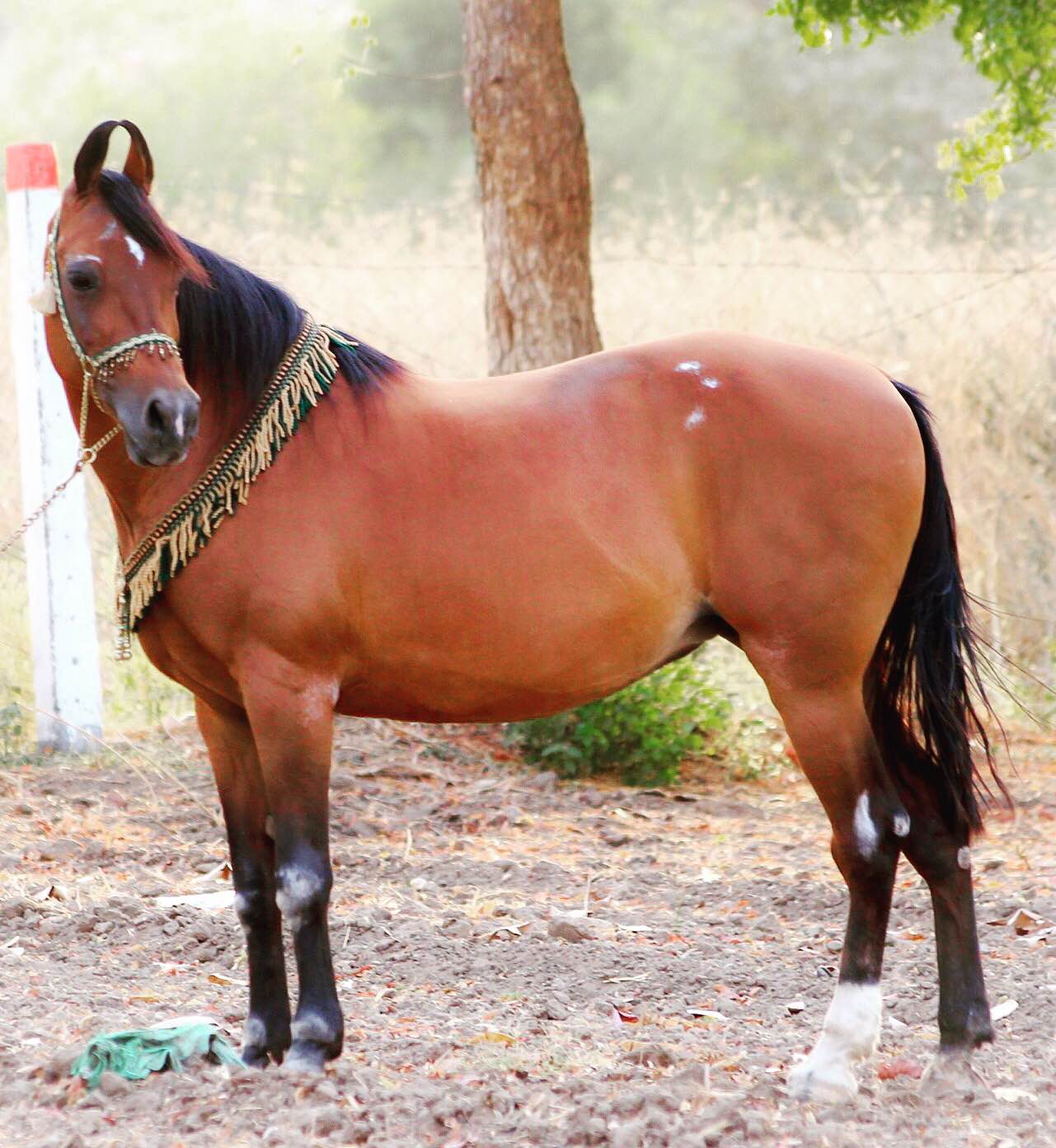 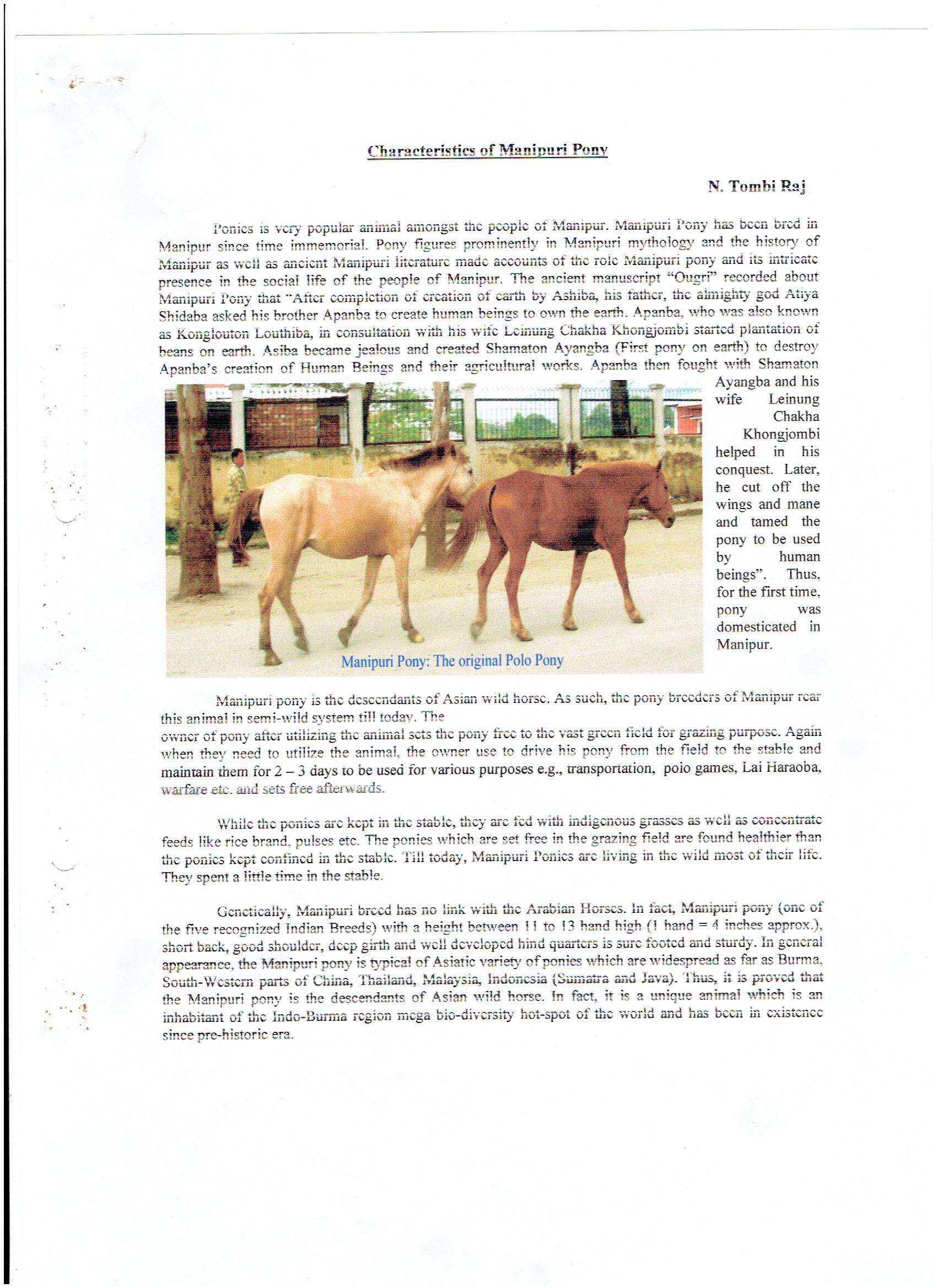 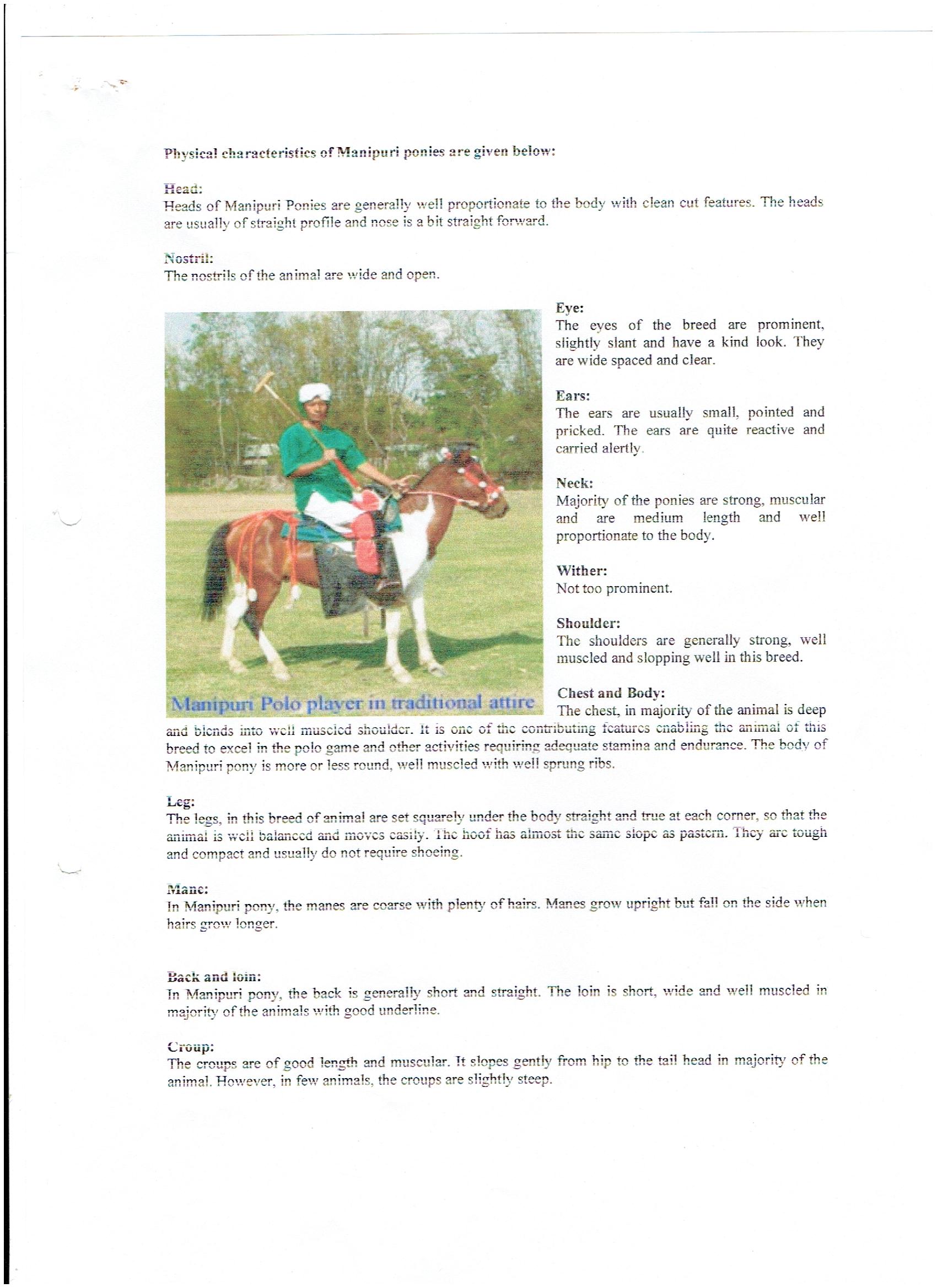 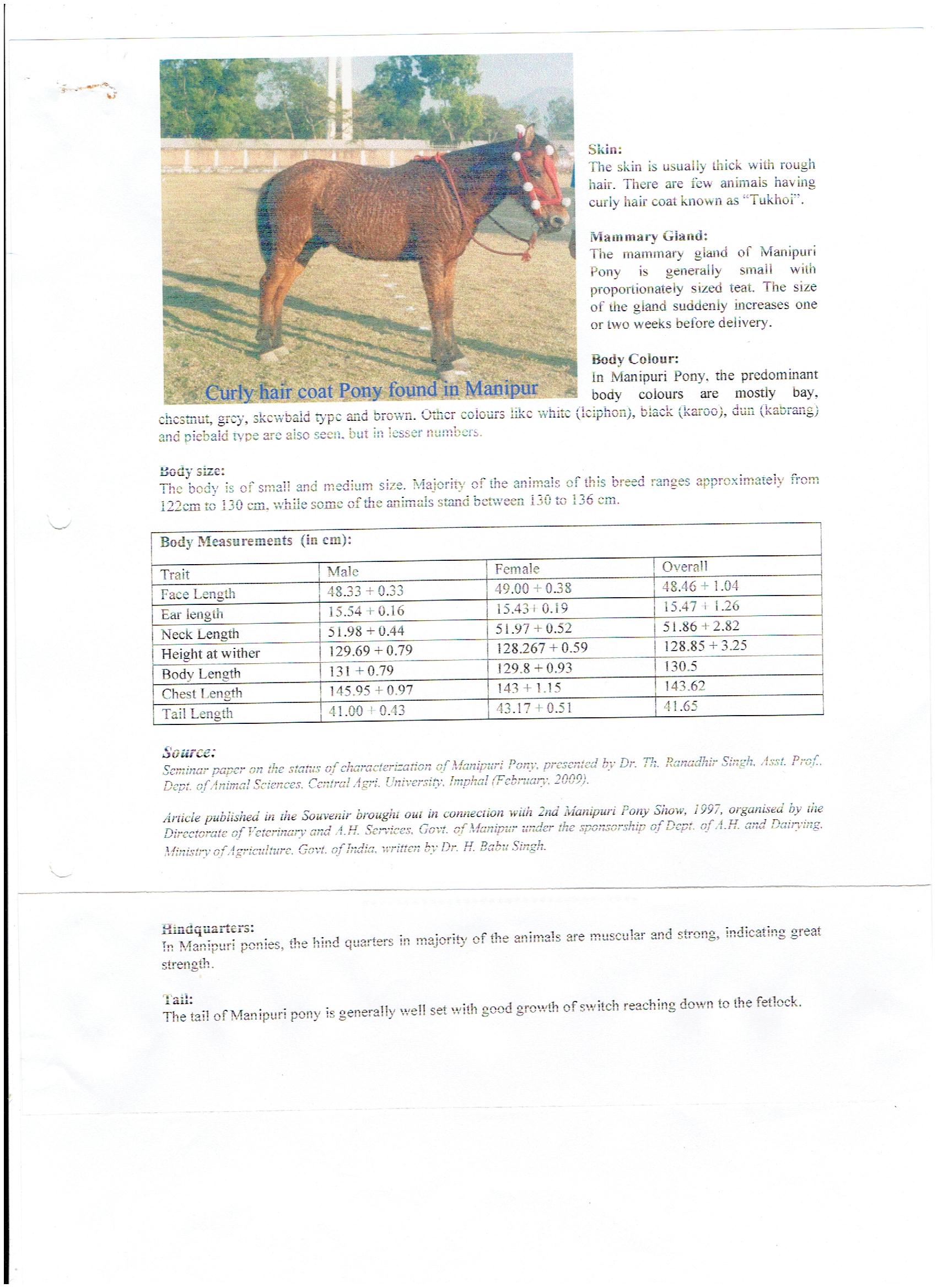 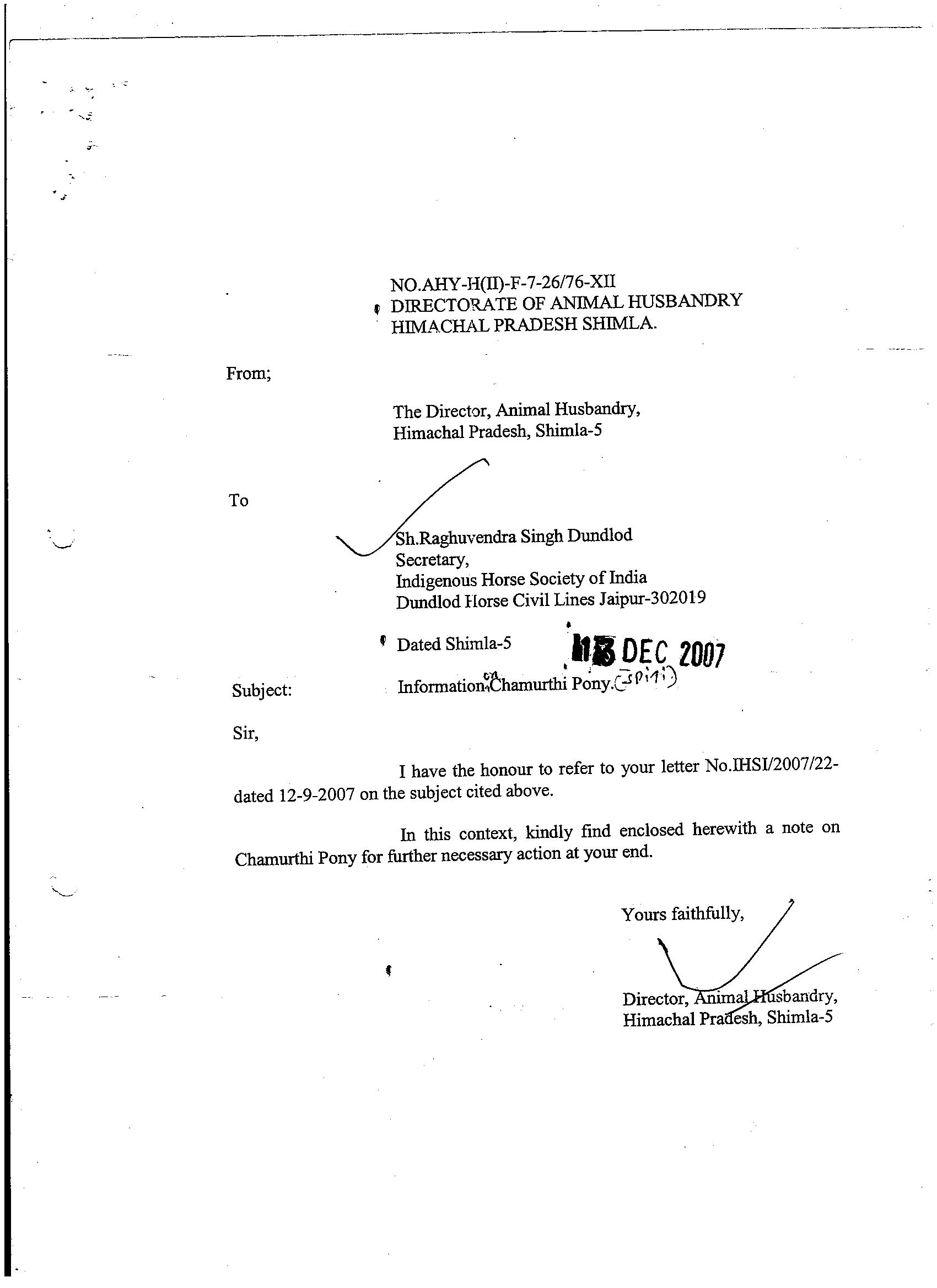 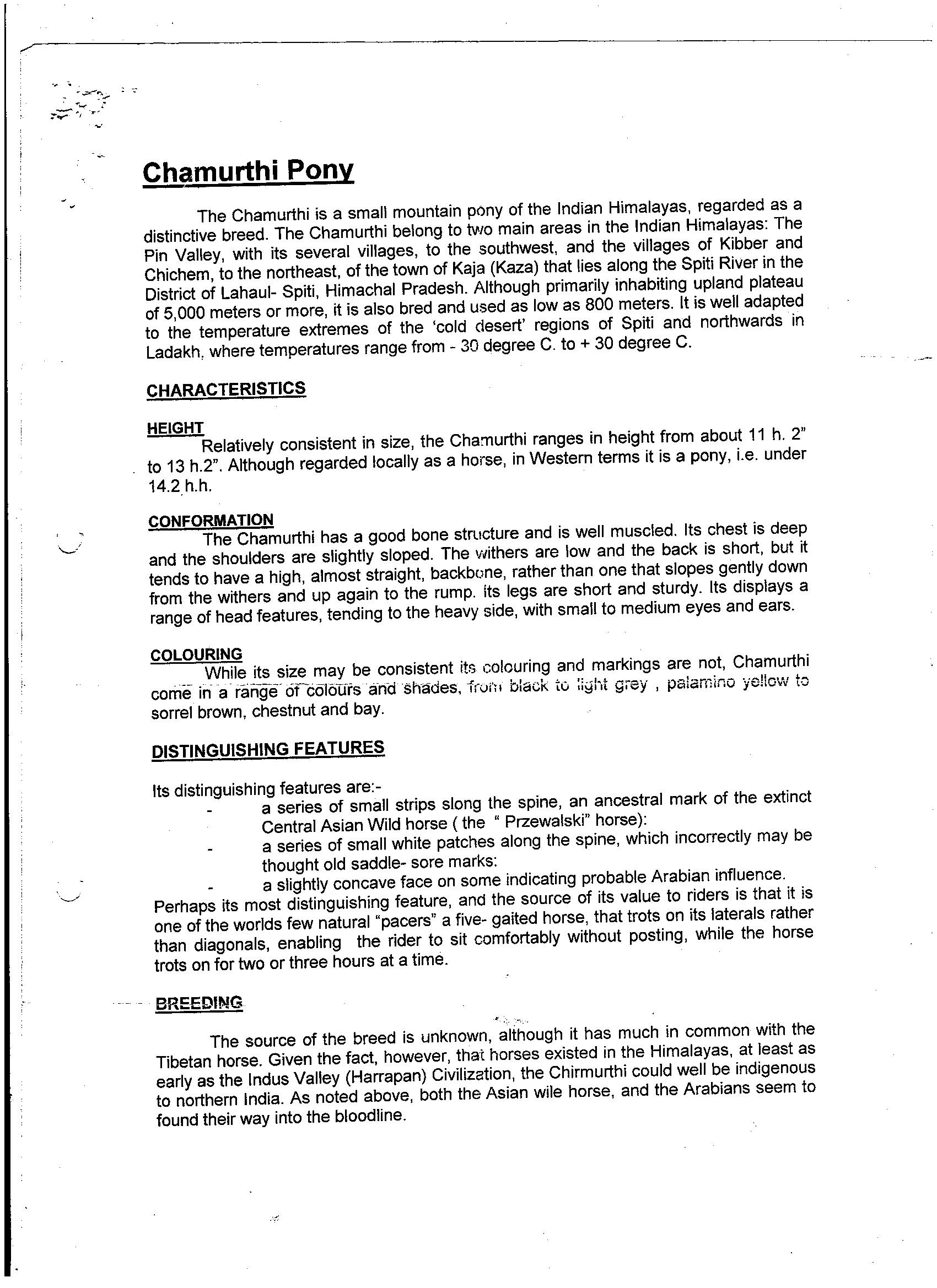 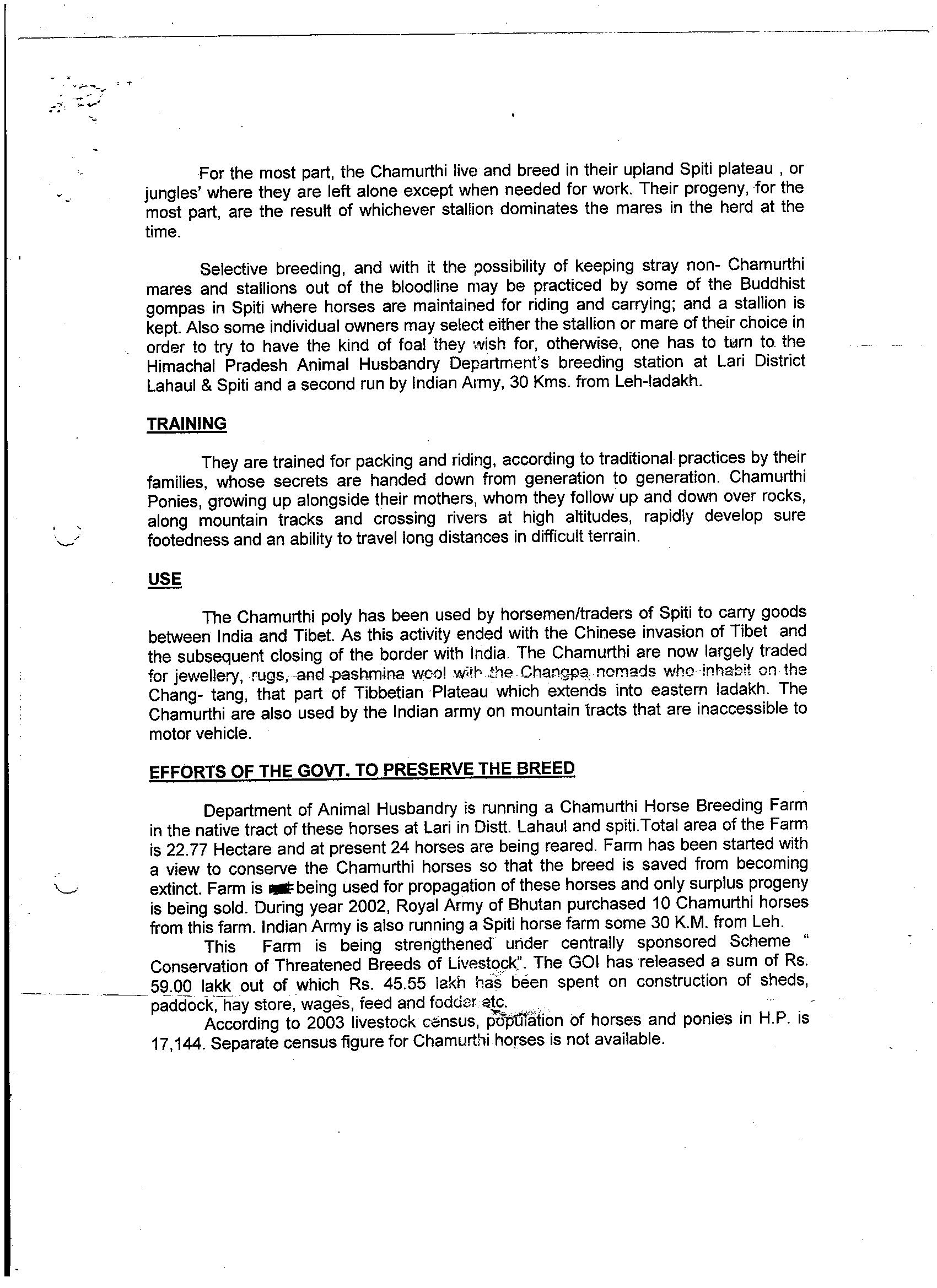 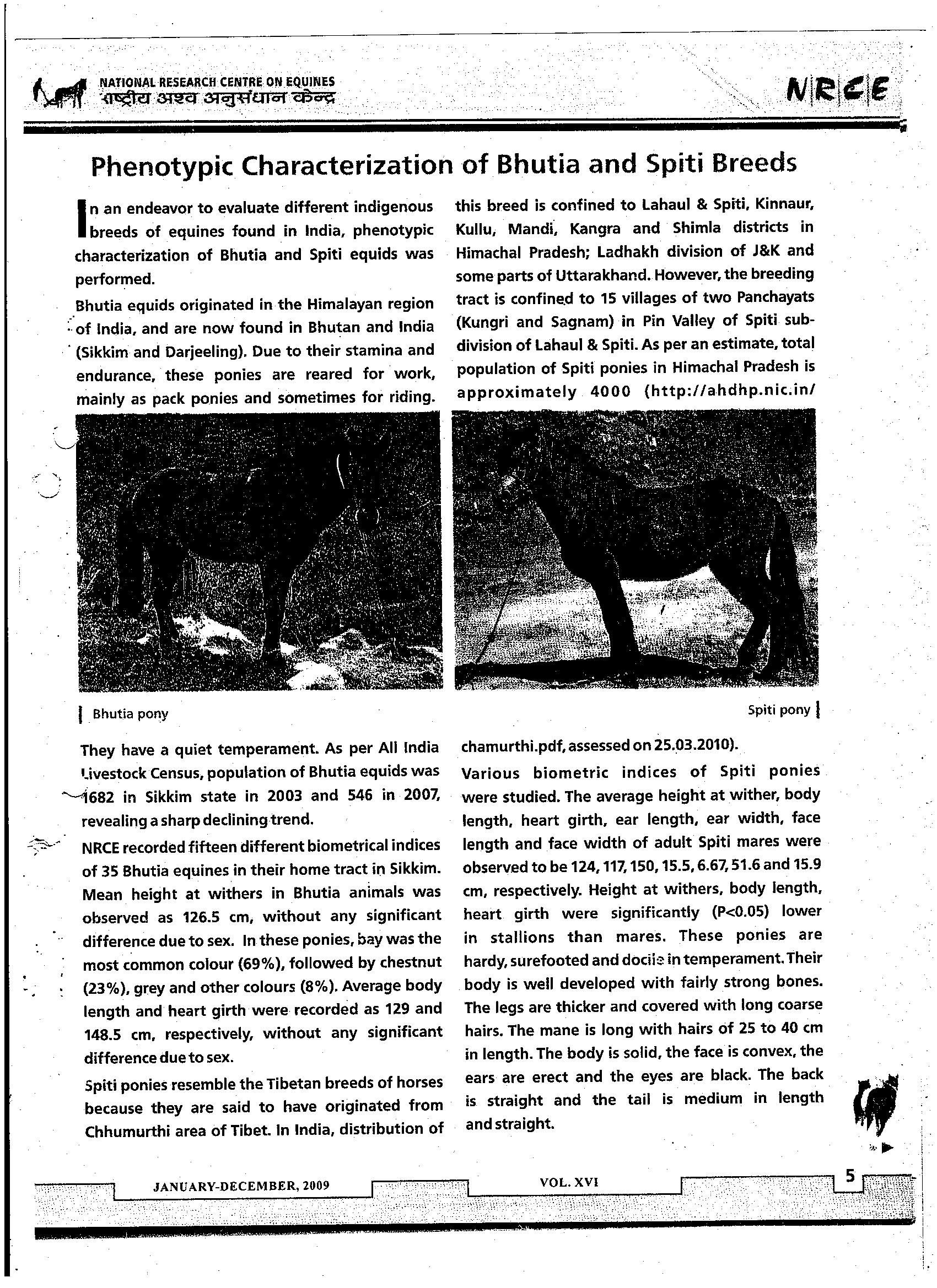 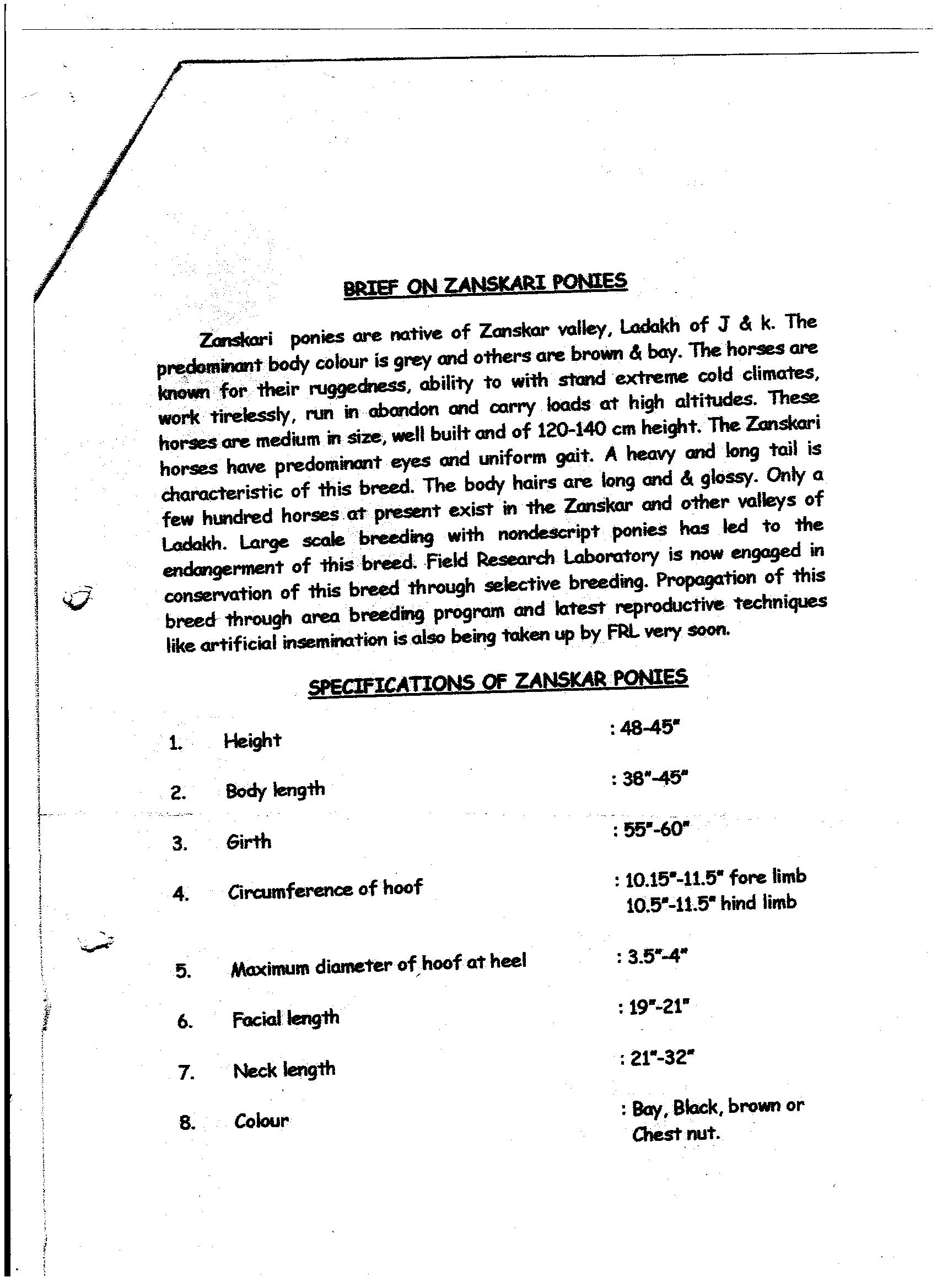 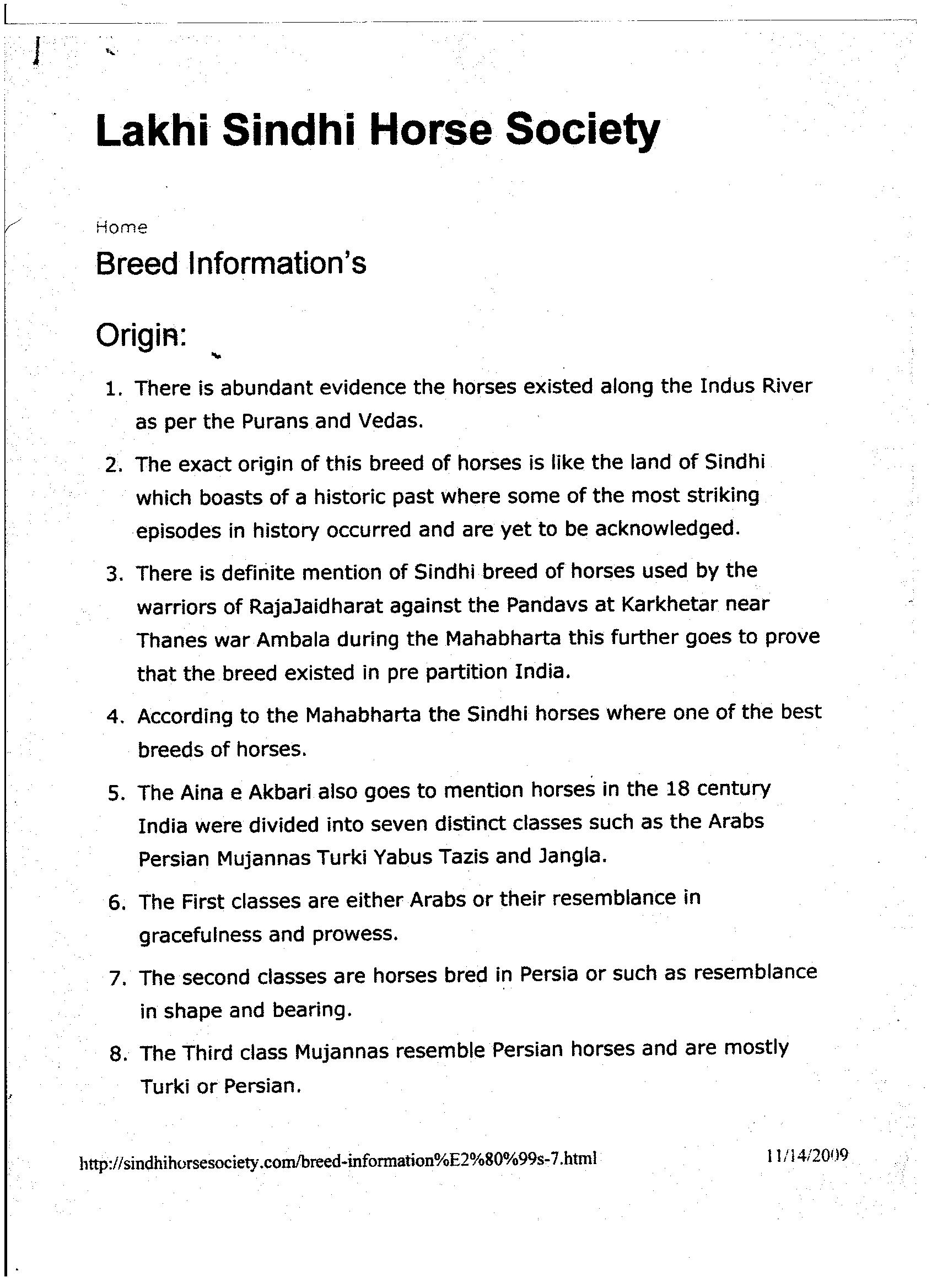 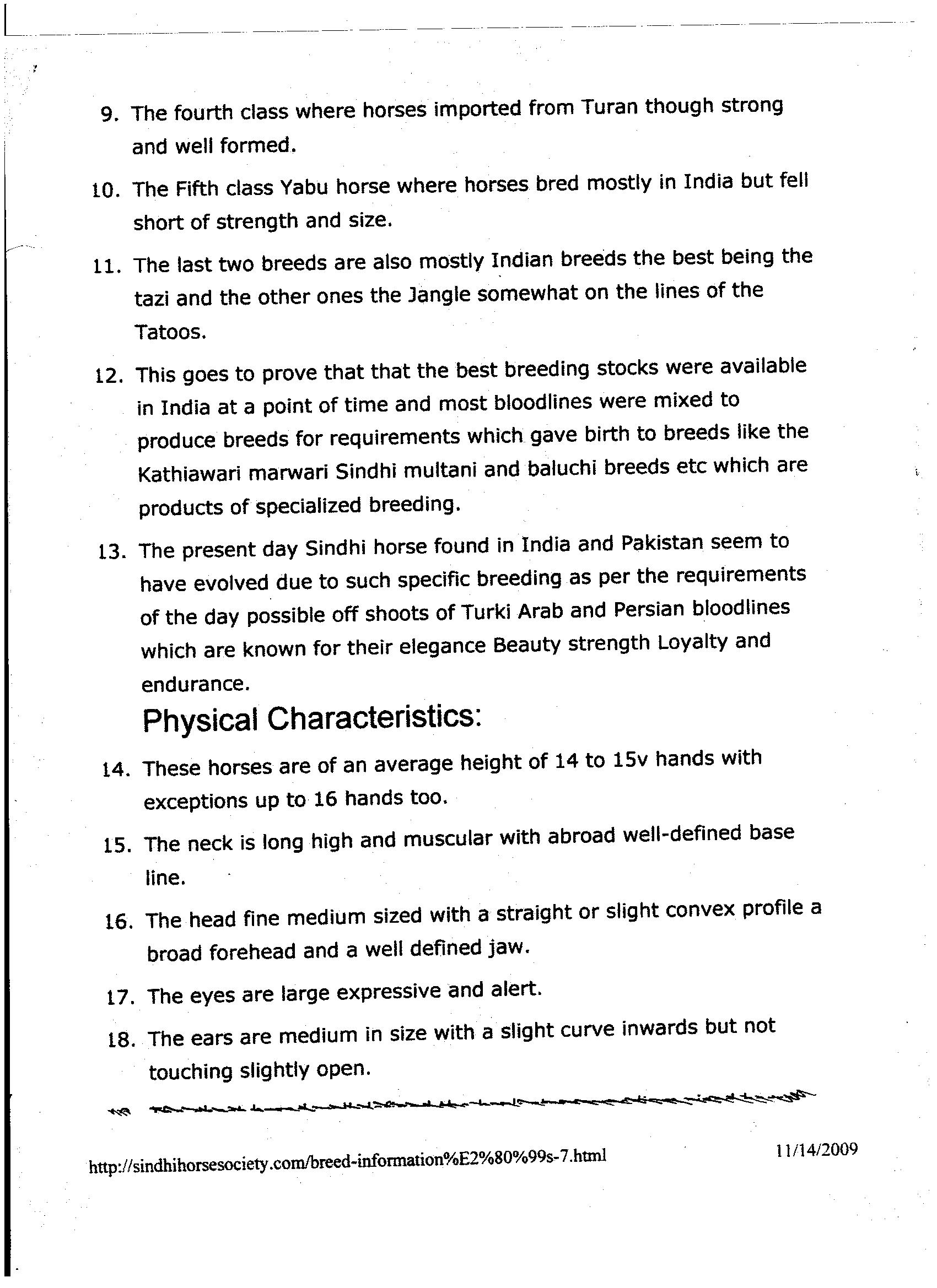 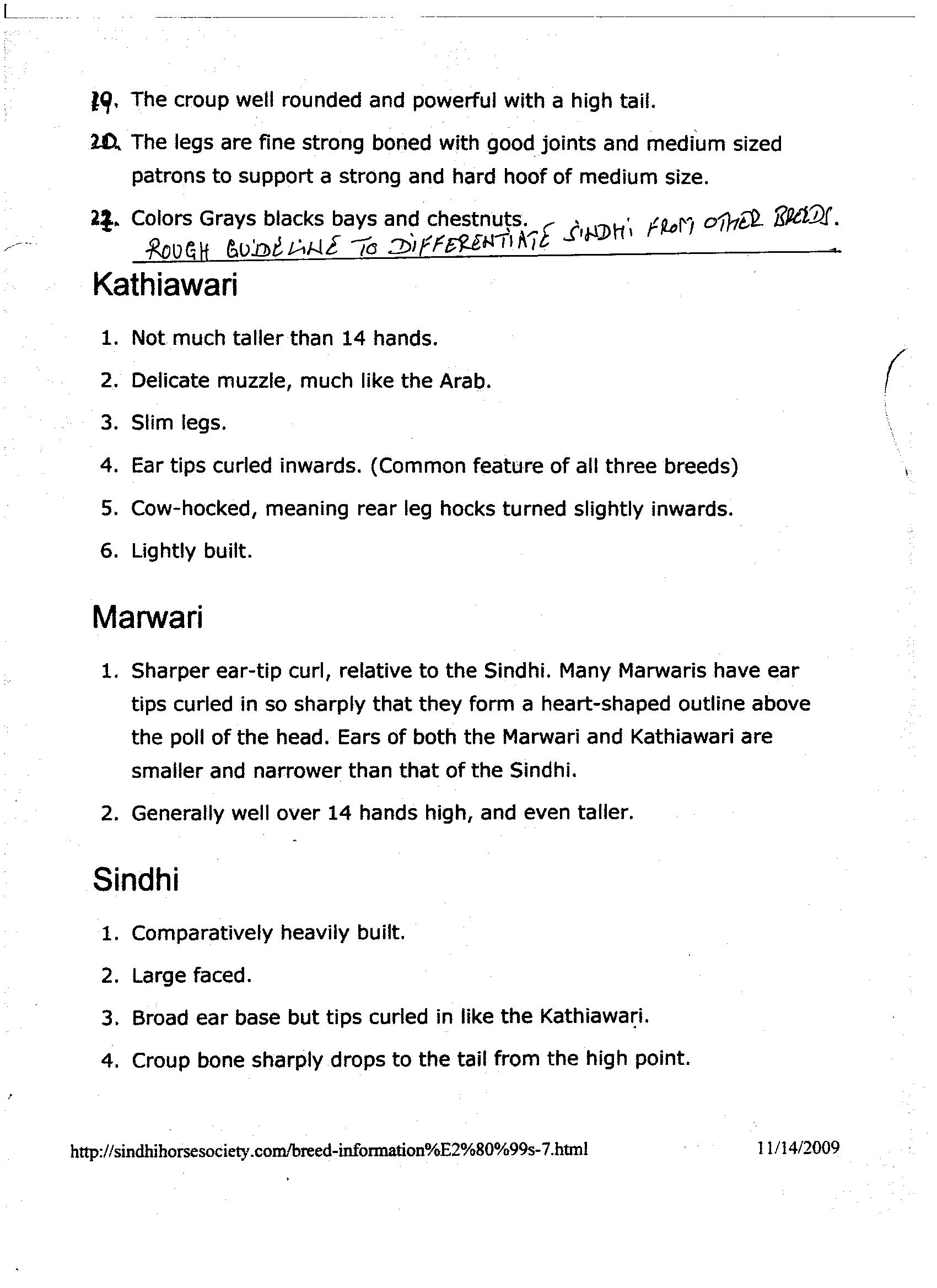 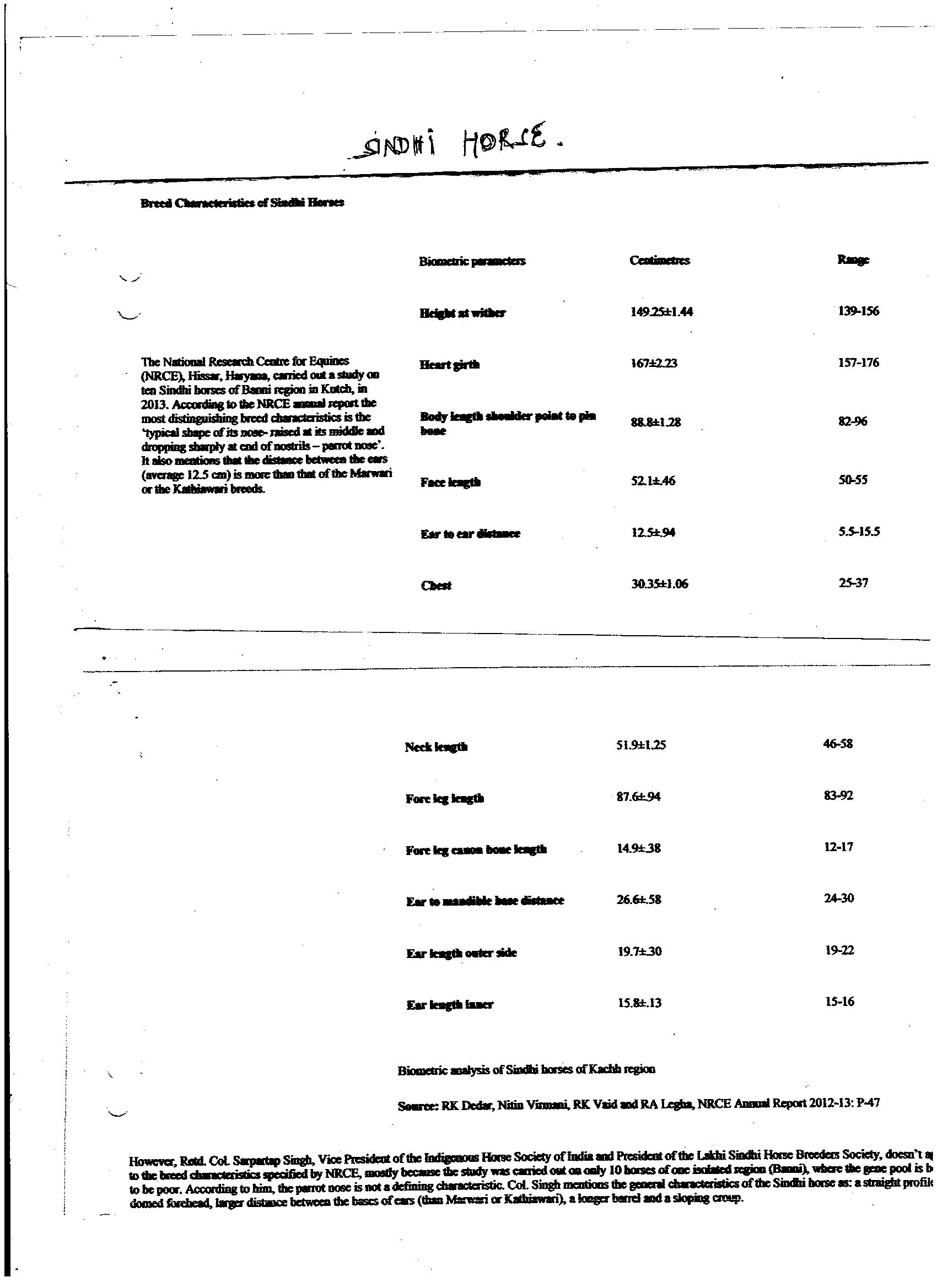 31-Breed Standard of Nukra Definition of the outward appearance Among the different breeds, the Nukra has an exclusive position. This cultural breed is considered to be the most auspicious for weddings and religious events in India. As a parade horse, the Nukra shows nobleness, expression, and talent for dressage and carriage. He must have a moderate nature (well balanced) and a good character. The body is rectangular and the ideal height is between 155 and 158 cm. at the withers. The traditional grey colour is dominant. A) Type Both the riding and ceremonial horse type are accepted in the Nukra breed. Both should be judged within its special character, extremes should be disliked. The subconvex profile throughout the body with rounded outlines is typical for the breed. B) Height Average height, to be measured at the withers, is for males 155 – 158 cm. Bigger or smaller horses must be harmonious in extra good breed character. C) Colour The white colour is dominant. Pink and crème skin, Mane and tail can be white, yellowish or golden tinge. The skin should be by far unpigmented or have few black spots at the genitals, inside the ears or under the eyes. All other colours are disliked. D) Attitude A natural ability for concentration with a great disposition for collected work and/or large endurance for riding and ceremonial puposes. E) Movement Proud and elevated action. Long elegant and in complete balance in walk, trot, and canter. F) Head Well proportioned, of medium length, narrow and dry, with not too pronounced lower jaw and the cheek inclined to be round. A slightly convex profile belongs to the breed character of Marwari/ Kathiawari/ Sindhi horses. The eyes intend to be large and dark, expressive and confident, the ears are of medium length, fine and expressive. The Eyes are another unique feature resulting from the delusion gene. They may differ greatly from paint blue eyes, which result from spotting gene. There is some times difference in the eye colour, blue pigment or even green or amber. Pain blue eyes are usually very light ice blue. G) Neck Medium length, arched with a narrow mainline, the junction between head and neck is not too narrow, the neck is deep in the base and well inserted between the shoulders, rising up from the withers without interruption. H) Withers Well developed and long, with a smooth transition from the back to the neck, generally higher than the croup. I) Chest Of medium size, deep and muscular. J) Ribcage Well developed, deep and not too long, with ribs obliquely arched into the joint with the spinal column. K) Shoulder Should be long, sloping and well muscled. L) Back Well defined and tending towards the horizontal, making a smooth union between withers and loins. M) Loins Short, wide, muscular, slightly convex, well connected with the back and croup, with which they form a continuous harmonious line. N) Croup Strong and rounded, well muscled and balanced, slightly sloping, the length must not be short than the width, the profile convex and harmonious, with the point of the hip not too pronounced. The tail must not be set too deep, with long and silky hair. O) Legs The legs are well muscled, with regular angles. The joints are well proportioned and dry. The upper arm is straight and muscular. The cannons are not too long. The fetlocks are dry with very little hair. The pasterns are of medium length and regularly angled. P) Hooves The hooves are hard, of good quality, well defined, and proportional. Q) Temperament and Character Noble, generous and ardent, but always gentle, friendly, willing to work, able to bear pressure and directed to men. 2.54 cm. = 1 inch, and 10.16 cm. = 4 inches (one hand) 155 cm. = 61.02 inches or 15h1 158 cm. = 62.20 inches or 15h2 Cremello horses have cream coats with pink skin and blue or glass eyes (cremello is pronounced with emphasis on the penultimate syllable). Their manes and tails are white. The cream colour can vary from a very pale off white to a richer colour resembling a pale gold (like a pale palomino). If they are not white (due to socks or other white markings) the lower legs may be a slightly darker shade than the body. Cremellos are sometimes called pseudo-albinos. In other animals (including humans) there are recessive alleles at the C locus that cause true albinism. Individuals homozygous for these alleles lack pigment in the hair, skin and eyes. Their eyes and skin are pink (due to the effect of the blood vessels beneath the surface) and albinism is often accompanied by various congenital defects.